I’ll just write a letter tonight as it is after nine o’clock now. Our telephone is out of commission so I don’t know whether any one heard from you today or not. I always like to hear from them if there is any news of our “soldier boy.”

Yesterday was a glorious day and it almost seemed as the Spring was surely on the way – but last night it RAINED and RAINED and today every thing is frozen up again. Ransom took the milk to Smith’s Basin today but when he got to Hugh Story’s they told him he couldn’t get in that way as the creek as the Basin was over the road – it was way up to the store steps — so he had to come back and go by Dunham’s Basin. He didn’t get home till half past three. When Ransom was driving down to the milk house this morning the wind took the box of the sleigh and swung it right around, off the bolstur, and nearly at right angles with the sleigh. I don’ think I ever knew the wind to blow much harder. The roads are awfully icy and Ransom said, that up by Smith’s the back end of the sleigh was blown right up around almost to the horses hills. Wind blew here on Tuesday.

Grace was feeling pretty blue yesterday. She got a short letter from Milton, mailed in Newport, saying they were all ready to start for “over there”. He has been laid up for some time with blood poisoning in his leg. Don’t think he’ll be able to walk yet. That makes it seem harder.

Ransom and I are sending you some “smiles” as we can’t entertain you at the theatre here. Hope they will help fill in the time and remind you that we WISH for you all the best to be had, where ever you are.

Well it’s bed time and I must gather up the little ones playthings and go to bed — each day is full but I’m glad to be well and to be able to do my share.

Ransom says to tell you he would have liked to write you but he rode the goat last night and isn’t able to do ANY THING. 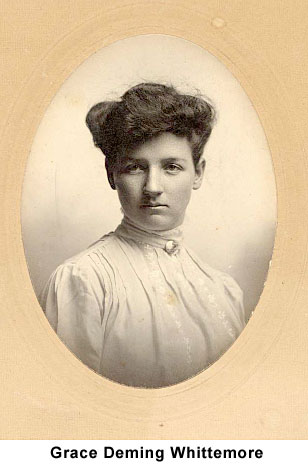 Note: riding the goat was an initiation rite of the BPO of Elks and became the subject of an anonymous poem in 1901. I am not a Mason so I am not sure if this should be taken literally or not.