Hasn’t this been a glorious day? And it seems SO good after the cold weather of last week. If this keeps up we won’t know this old world in another week — the grass is beginning to show a faint green already and it won’t be long till the woods will be full of may flowers. I went for a little ride this morning — not in the car. It’s pretty muddy for that — but it was simply fine out doors. The cars are running though. Wesley Deming brought Albert Daly’s car — an old Ford — home yesterday. You know Albert enlisted in the Navy last Fall and tried to bring his car home — then got as far as Schenectady and had to leave it. Guess the car wasn’t working very well and it was pretty slippery too for Wesley was between twenty minutes and half an hour getting up this little hill below here.

I wonder what you’ve been doing this afternoon — out ruining the scenery I suppose. Well, that’s all right for you but don’t you try to get Ransom down there. I don’t think I’d trust him down that way again — ALONE.

I suppose Jen has written you about getting a letter from Bob Taylor. I feel so disgusted with myself to think I haven’t sent him another box before this. I really meant to but kept waiting to see if Bessie heard from him. For I thought he might be gone — and he IS gone by this time I suppose. At least he expected to move from Camp Gordon. And you know we can’t send any pkgs. over seas unless by an approved request from the soldier. So you will have to ask for things if you want them when you get to France.

Here it is seven o’clock and the sun is shining beautifully. So much for the new time. Ransom had a carload of fertilizer come yesterday that had been ordered since Jan. They will finish unloading tomorrow.

Of course you must have heard about the fire at Dunham’s Basin last week? Horace Dibble’s house burned and he was burned in it. It was a terrible thing but the Dr. said that he must have inhaled the smoke so gradually that he never realized anything. He hadn’t moved off his bed.

I hear that Eva Barker and the Sumner fellow are to be married soon. That makes me think: Did Chet Barker’s folks ever write you. Chet told me they had once and I wondered.

Well I guess I’ll try to write a letter to Bob and send to his old address for they will forward that to him.

Jen was just telling me that Charlie Simmons is home — came last night and is going to stay until Wednesday. I have heard that he expects to go across soon.

I really must stop now or I WON’T get that letter written.

I’m sending you a snapshot of the youngest off shoot of the Whittemore family.

(Enclosed is a photograph with the following caption written on the reverse: ) 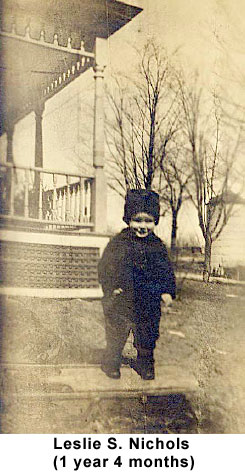